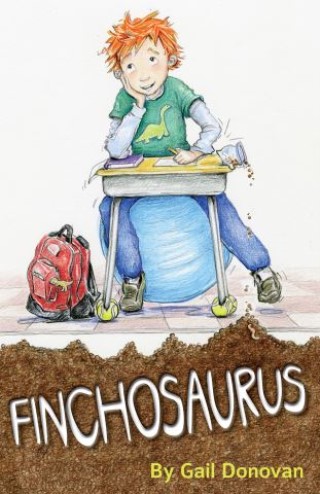 Finch has trouble paying attention in school. He’s just too busy dreaming about uncovering a dinosaur fossil and naming a new species after himself—until he digs up a note in the fifth-grade class garden with the word HELP on it. He is determined to come to the aid of the mystery note-writer. But when the quest turns out to be harder than expected, Finch risks losing two things that he really wants—his best friend Noah, and a field trip to Dinosaur State Park. Acclaimed author Gail Donovan gets inside the hearts and minds of fifth graders on this journey told with unexpected humor and impressive insight.

Gail Donovan: Gail Donovan is the author of the middle-grade novels The Waffler, What’s Bugging Bailey Blecker?, and In Memory of Gorfman T. Frog, which was named a New York Public Library Best Books for Children. She is also the author of ten picture books in the Rainbow Fish & Friends series, based on the bestselling books of Marcus Pfister. Donovan, who was born and raised in Connecticut, lives in Maine with her husband and two daughters, where, in addition to writing children’s books, she is a library assistant at the Portland Public Library.